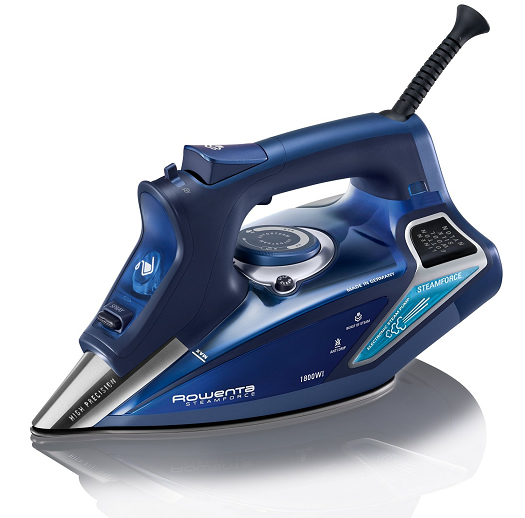 One of Rowenta’s most recent and most powerful steam irons has gained a lot of popularity due to its new deeper steam technology. This is the Rowenta DW9280 which claims to have a stronger steam output at 210g/min will push 30% more steam deeper into fabrics ensuring perfect and quicker ironing results.

There are already many other steam irons within the Rowenta range that have a good steam output and gives good results, but not quite as much as this mode. In this article, we will review just how much stronger the steam output is on the DW9280.

Pump Injection Technology – This will push 30% more steam deeper into your clothing which will give you perfectly ironed clothes.

Energy Efficient – When the iron is not in use, the Smart Steam Motion Sensor will automatically turn off the variable steam to conserve water and electricity, saving you money in the process.

Ready Temp System – The LED indicator will tell you when the soleplate on your steam iron has reached the correct temperature for your selected fabric. This is handy especially when time is an issue.

Self-Cleaning System – The Rowenta DW9280 has a built in self-clean and anti-calcium system which flushes out loose mineral deposits, impurities and dirt to ensure optimal performance of the steam iron. This will also extend the life of your steam iron.

Made in Germany – This Rowenta model is actually constructed in Germany instead of China. This should mean that better quality control is in place.

More power usually equals more problems. This may or may not be the case with this mode. We’ve researched over 100 real user reviews to highlight the positives and negatives of their experiences with the Rowenta DW9280 steam iron.

The Rowenta DW9280 SteamForce steam iron is of a similar shape to the rest of the Rowenta steam irons within its range with its slanted back, thick and sturdy handle and slim curved design to the sharp tip. However, this model stands out beautifully with its electric blue coloring.

Under the handle is the thermostat dial which controls the fabric and temperature setting. At the back of the steam iron on the left side is where the fabrics are listed on the ready-temp LED indicator. The selected fabric will blink as it heats up and when the correct temperature is reached, the LED will stay on. Next to the thermostat dial is the self-clean button.

On top of the handle is where the steam release button is so it’s easily reachable with your thumb when holding the steam iron. The water fill tank is in front which can be easily opened by pulling it open on the top edge.

There is a hole for the water to go in and a stopper attached under the lid for the hole which acts as a part of the anti-drip system so it will ensure water is not leaking out when you are ironing your clothing. It will click in place when shut.

The water level can be seen on the side when the iron is upright as the window is transparent and frosted. The max fill line is near the tip and the iron can hold up to 10.8 ounces of water.

Just below the water tank opening is the spray button which releases a cool light mist. This helps to remove stubborn wrinkles. The steam iron is fitted with a 360-degree pivotal corded electrical wire. It’s 7 feet (2.1 metres) in length which is long enough for you to do your ironing without being so close to the mains.

The Microsteam 400 platinum soleplate is made of stainless steel and coated with ultra-thin silicate coating. This ensures a tougher and smoother surface for an excellent glide without the drag. It is also non-stick and has scratch resistant properties so you won’t need to worry about any snagging or damage to your clothing.

Steam is distributed evenly from 400 steam vents on the soleplate and at the tip, there is a cluster of these vents which ensures a precise shot into hard to reach areas such as collar tips or in between buttons.

There have been a lot of positive reviews on the Rowenta DW9280. However, on the first few uses, consumers noticed a slight odor which had been stated in the brochure but this did not linger on their clothing.

This is usually the case when using brand new irons for the first time. The below sums up the important points that have been put forward by consumers.

The added power of steam means that an effective cleaning system must be in place. Fortunately, the Rowenta DW9280 SteamForce is fitted with a pretty efficient self-clean system which means the steam iron will flush itself of impurities when you press the self-cleaning button.

The in-built anti-calcium system will ensure lime scale does not build up either so this will result in a longer life of your steam iron. All you will need to do is to wipe the exterior of your steam iron so cleaning effort is minimal.

Click here to read reviews of the Rowenta DW9280 SteamForce

At 1800 watts, the Rowenta DW9280 SteamForce is a very powerful steam iron (more powerful than the majority) which heats up very quickly. Combined with its 210g/per minute steam output, this will keep ironing chores to half the time it would usually take as a lot of users have found.

This is ideal for people who work with a lot of fabric or anyone who regularly uses an iron on a daily basis particularly those of you who tend to iron just before going to work.

It is worth investing in if you want well ironed fabrics and clothing and as the iron self-cleans, it will ensure optimal performance at all times. With the anti-calcium system as well, it will last you a long time compared to an ordinary iron which you will probably be replacing every few years.